After many years of waiting, paitiently calling and messaging Comcast every 6 months, and a many disapppointments, the great Fiber to the Home saga is finally coming to an end.

Previously every time I contacted Comcast, they said that my house was within range of fiber and that they would start the process. This involved doing some calculations based on their existing network maps and then sending a field crew out to do a survey on foot. I always seemed to pass that step.

Then I would fail whatever internal criteria Comcast had for running fiber to my home. The last time they said something about my house being too far from the nearest servicable node.

But in the interim something changed. I believe it was due to the fact that Comcast upgraded my area to N+0 topology. That basically means they get rid of all the amps in the area and put nodes out as far as possible (where the amps used to be). To do this, they needed to run fiber to the existing amps and replace them with nodes. After that happened — this time around I was approved.

I decided to communicate with them through Reddit. Their customer service team is generally pretty responsive on that platform. They started the process as usual and over the course of many weeks, little bits of information trickled in. Here’s a timeline:

For reference, the name of the Comcast’s service offering is called Gigabit Pro and it will cost $1000 to install + $300/month for 2Gbps symmetric service + $20/month equipment rental. I was paying $200/month for DOCSIS 3.1 with 1Gbps/35Mbps down/up. Upstream will be at least 57x faster on fiber.

On April 15, “no parking” signs were set up on my block. Around noon a utility locator crew showed up at my door and wanted to get a head start on marking the sewer line. We rescheduled for the next morning since I was at work at the time. I learned from them that the bore was scheduled for the next day. 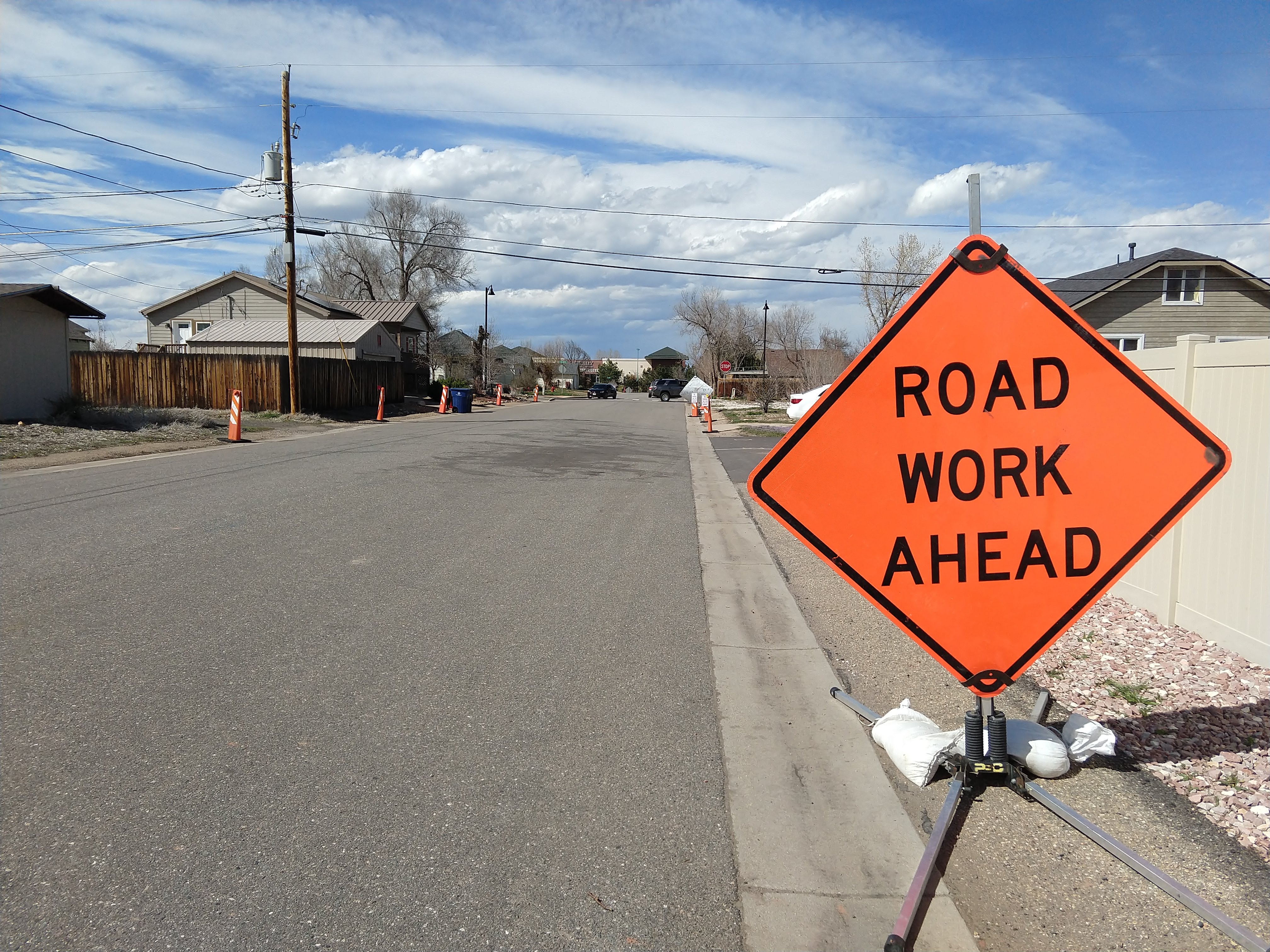 The morning of April 16 the locator crew showed up, as well as a streetload of construction equipment. 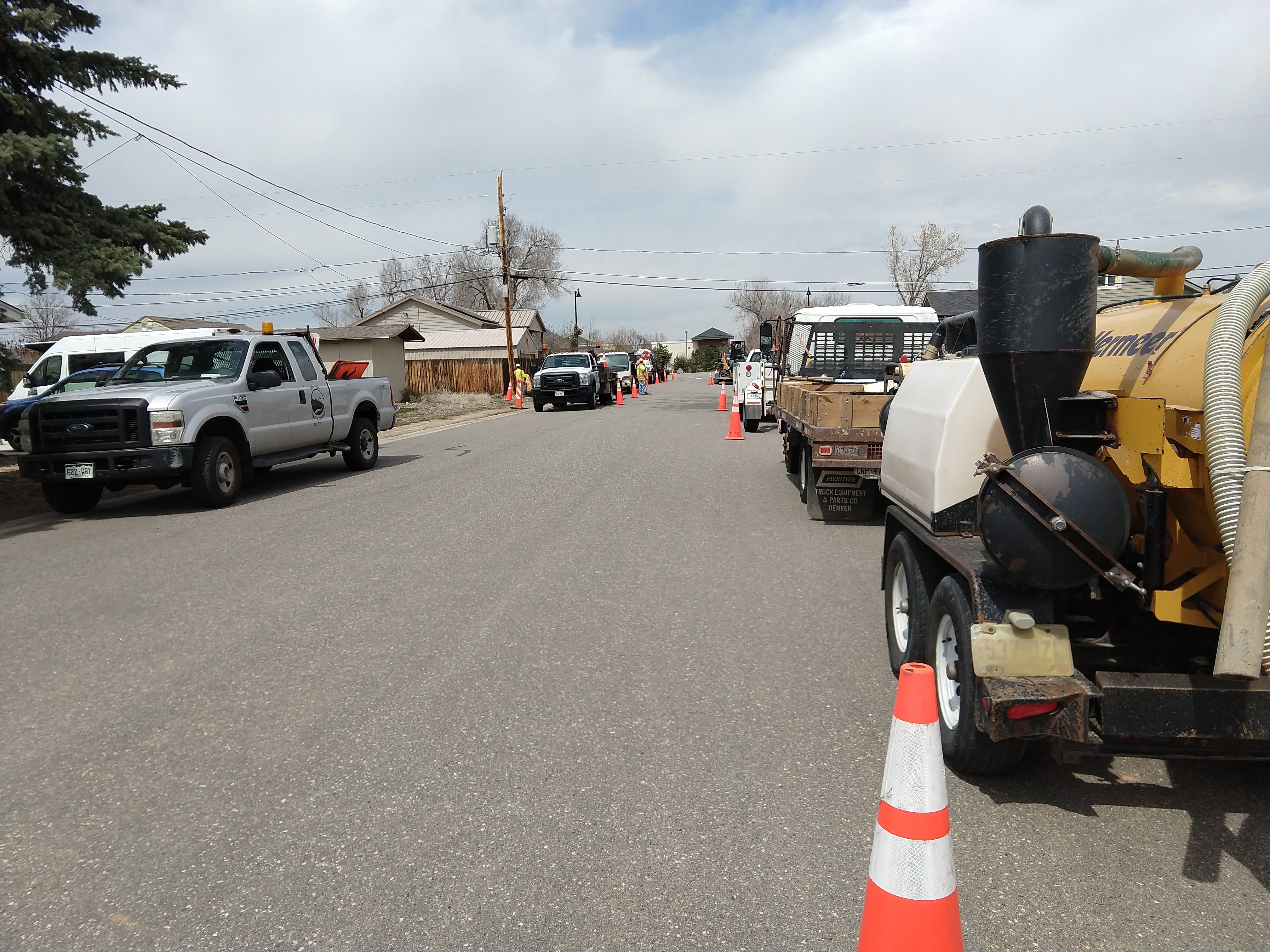 The locator crew had some trouble finding the sewer line once it went underneath my garage, but since the sewer in the street was 11 feet deep, the boring crew was not at any risk of collision until they got to my house since they went at about 2 feet of depth from the pole to the house.

The crew bored underground from a spot parallel to the back of my house to the utility pole. 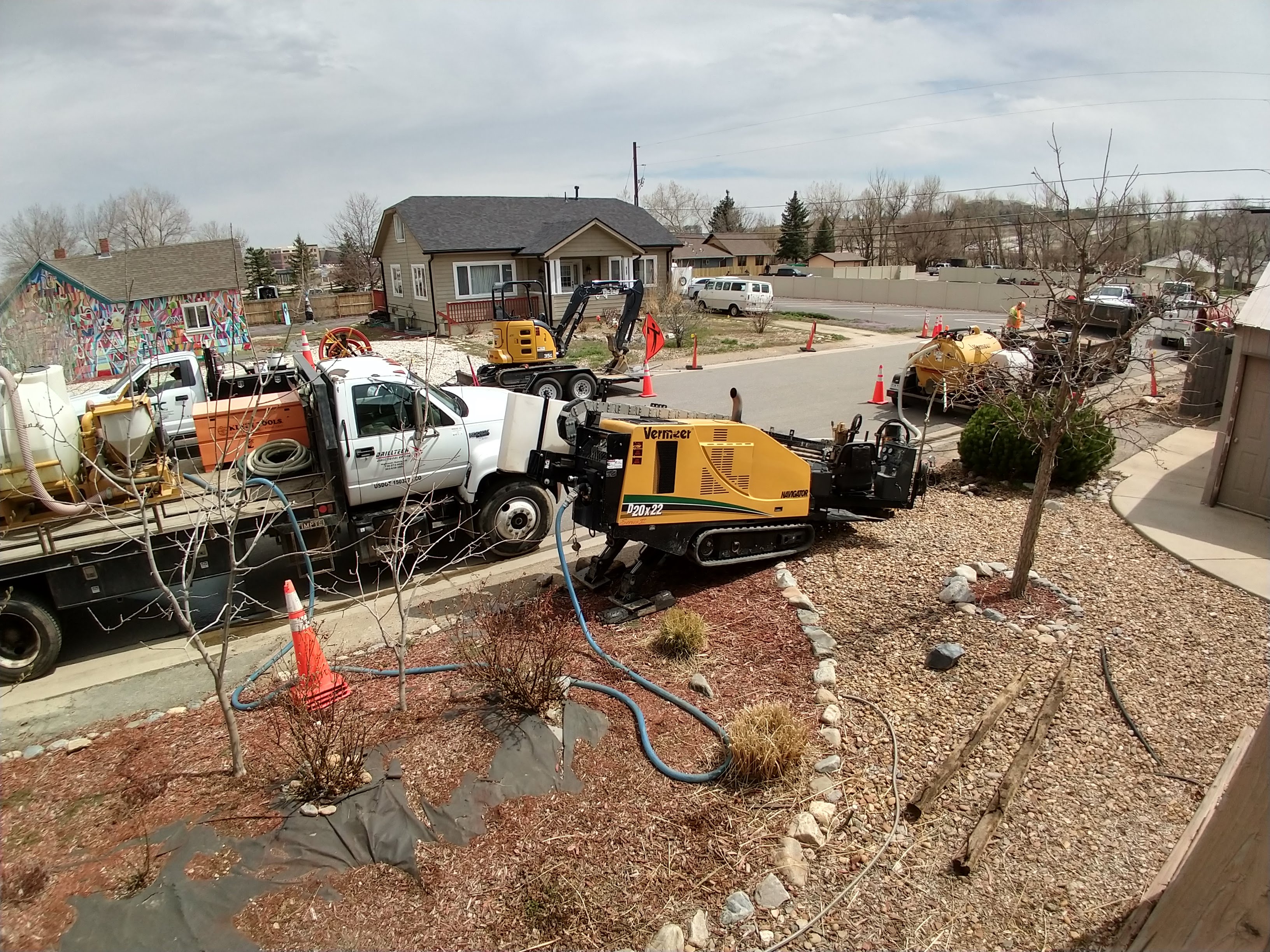 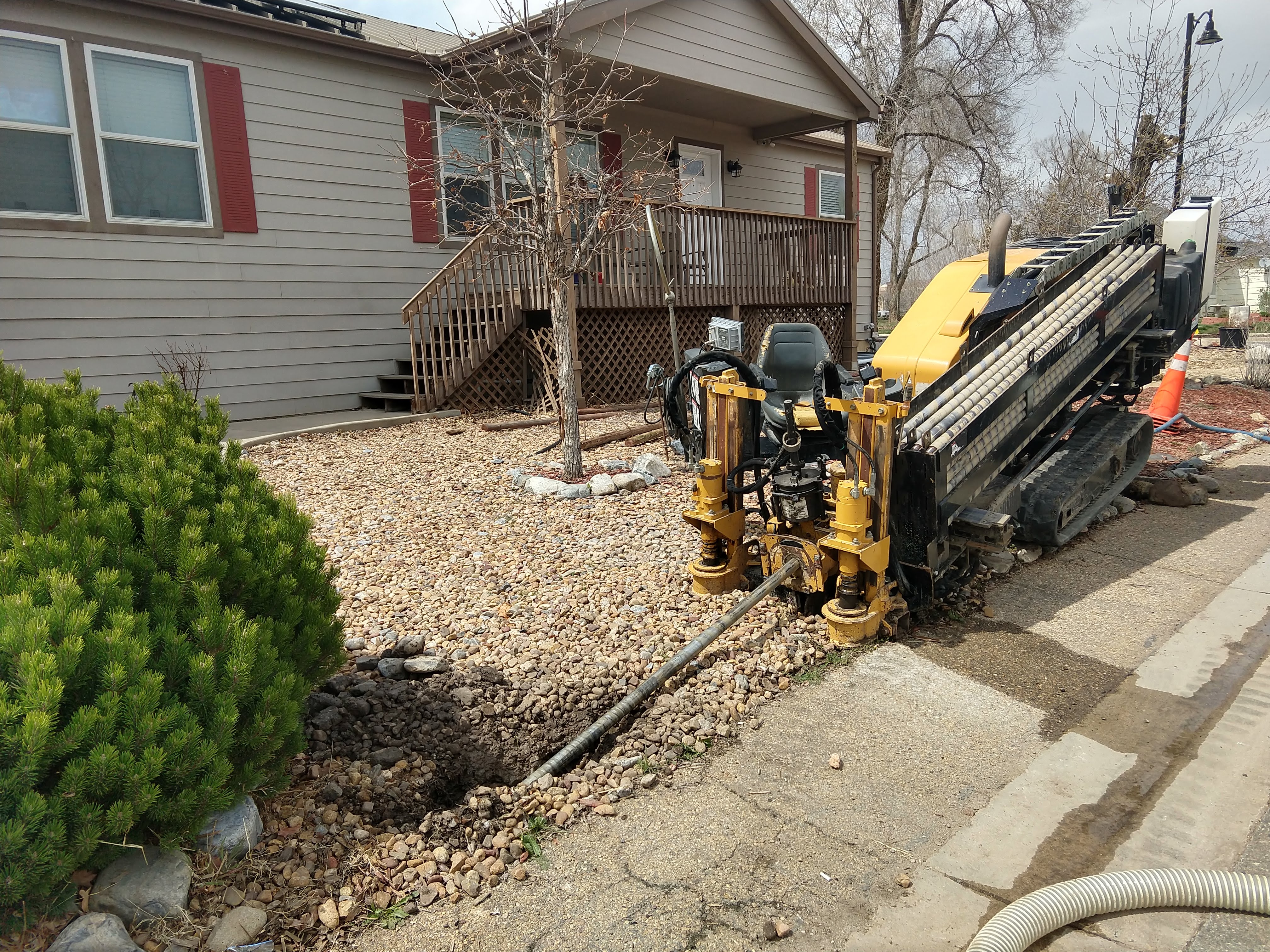 Then they attached to the end of the conduit and pulled it through the bore. 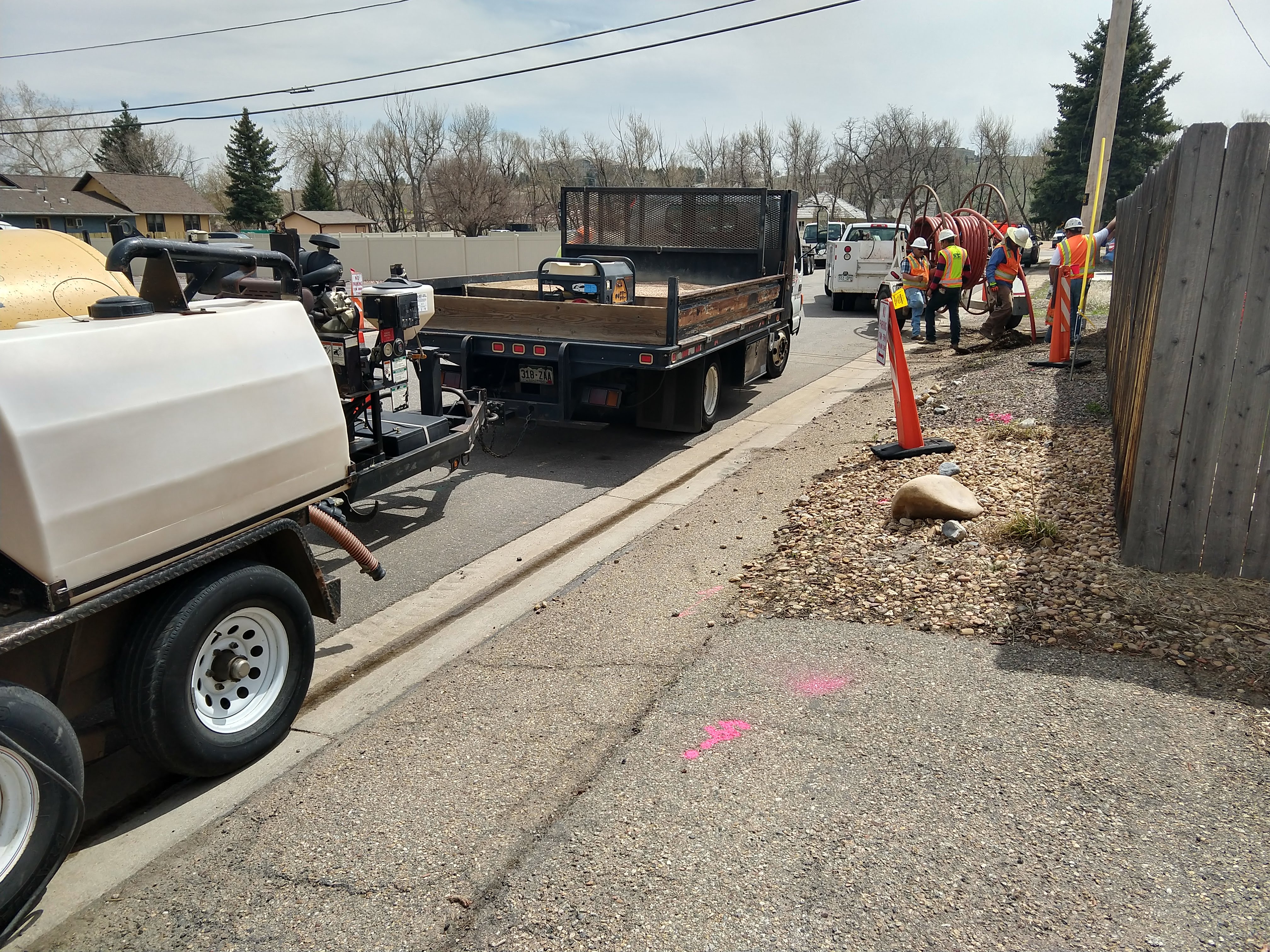 Repeating the process, they turned the machine 90 degrees and bored between the garage and the back of the house. It was tricky and the locator operator said it took them seven attempts. Initially they were going to go under the sewer line (which was at a depth of 2'3”) but they ended up going over it. Apparently my soil has lots of rocks in it.

I knew that already. 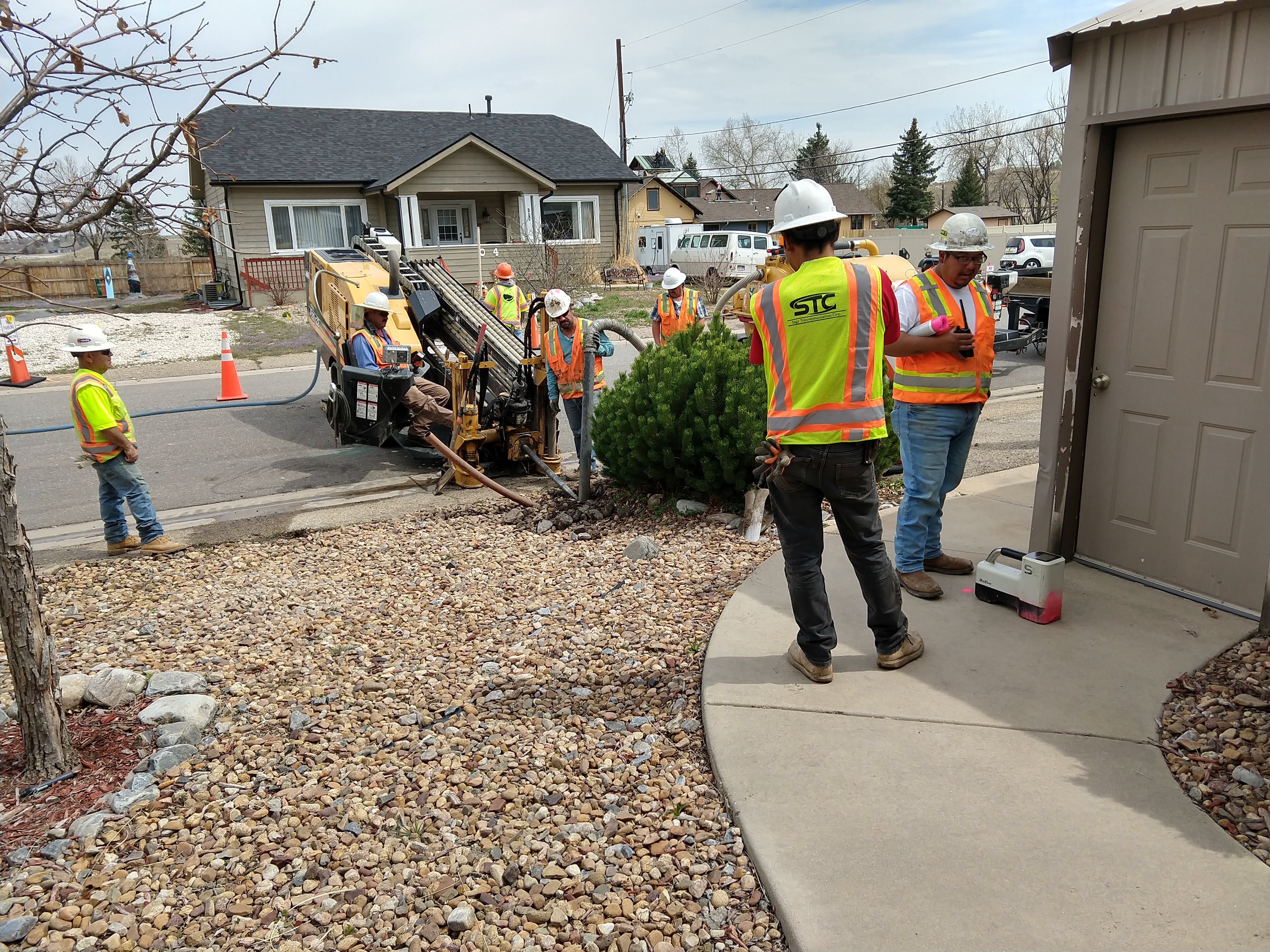 Ultimately I was left with this at the base of the pole: 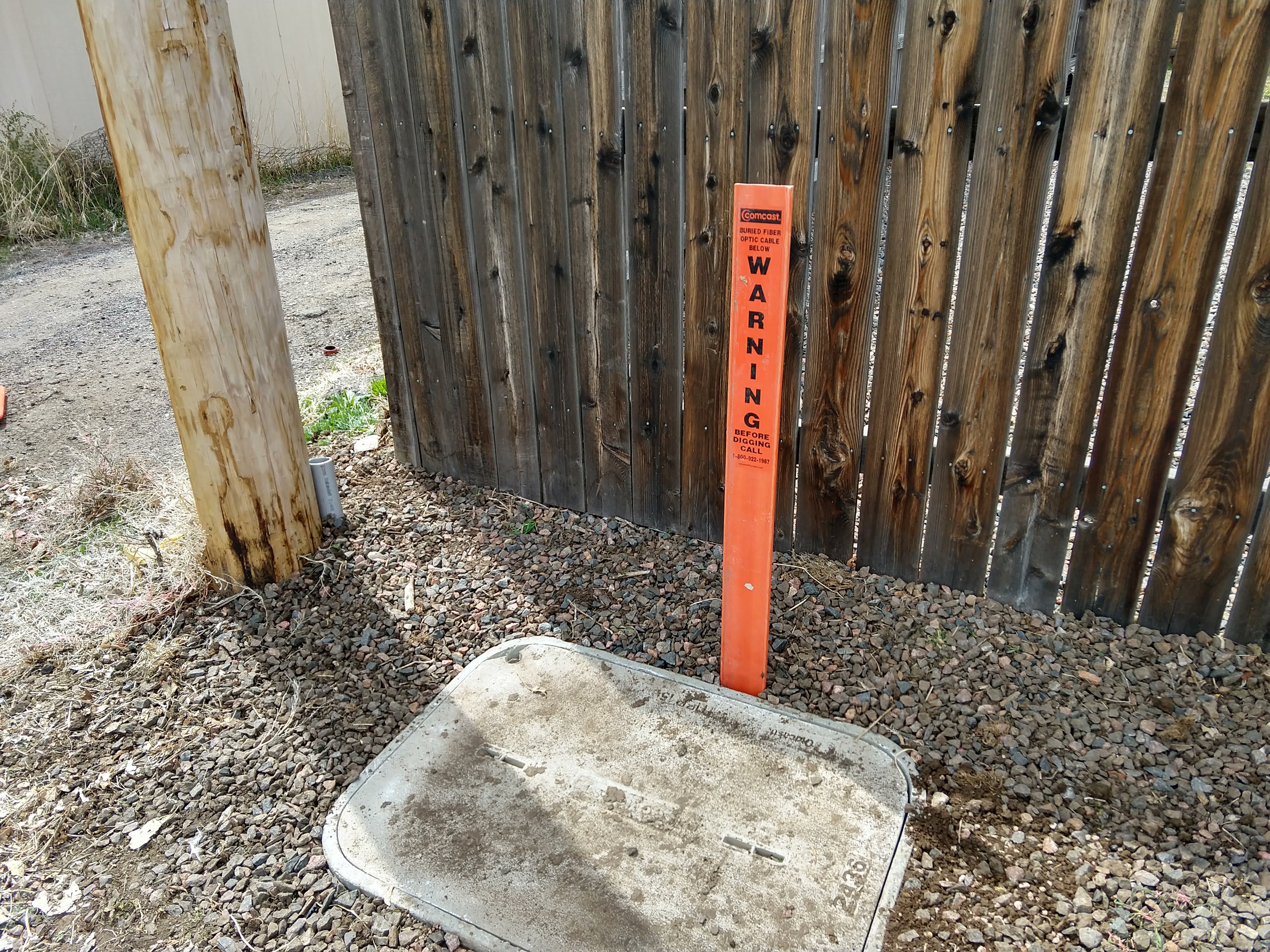 And, after another crew came on the 17th to connect the conduit and pull the fiber through, this at the back of the house: 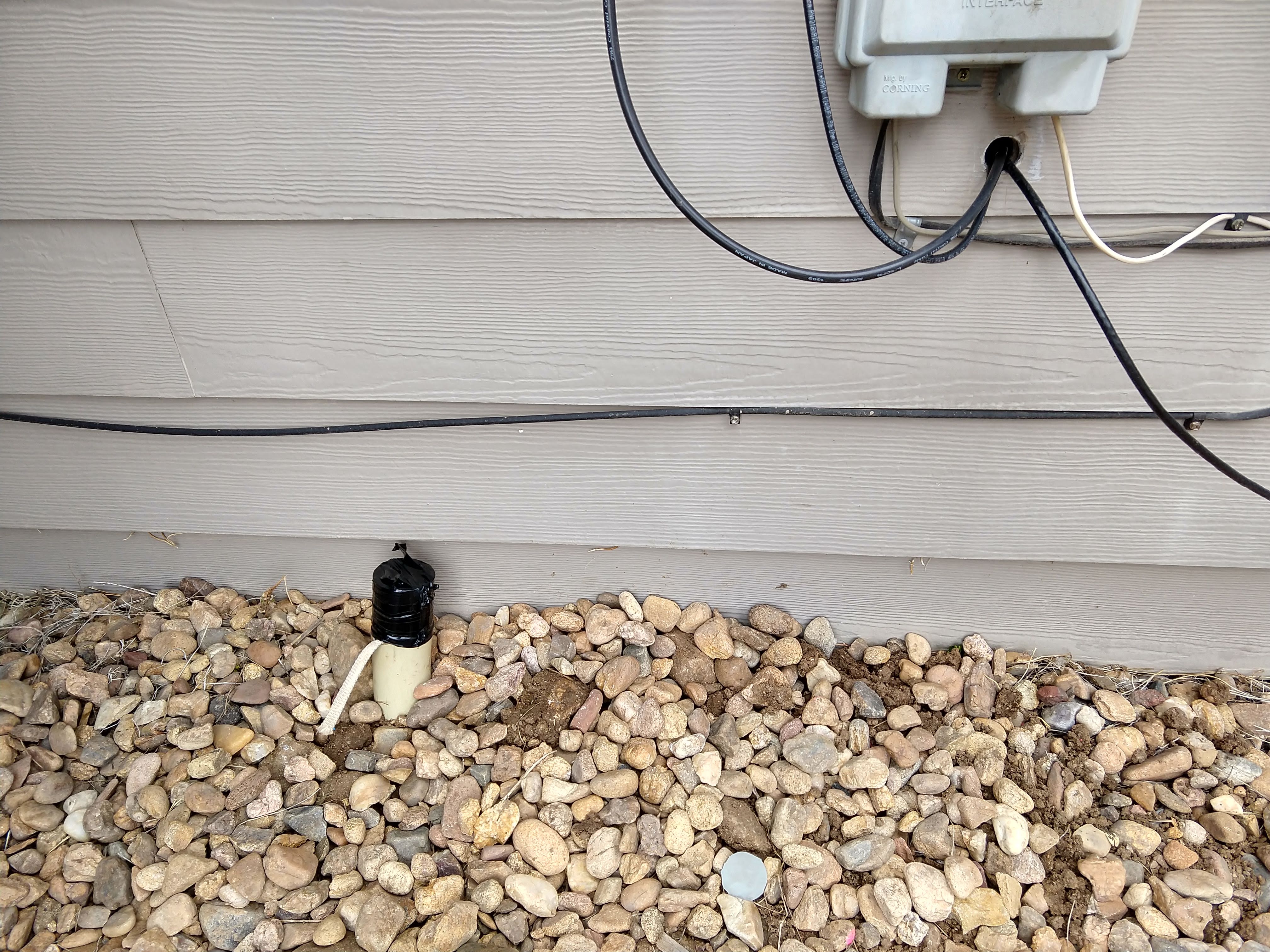 Ignore that hole in the siding. I’ll fix that.

By early afternoon on the 17th, all the traffic signs and cones were gone and the exterior contractors had finished. It was now up to Comcast.

Then around noon on the 18th, Comcast said, “The project manager let us know that the bore permit is in, design is done, and they’re now waiting on the equipment to arrive. He’s not sure when it will arrive however he’ll keep us posted.”

The morning of Monday the 22nd, the interior contractor called me to set up the install for the morning of Wednesday the 24th. 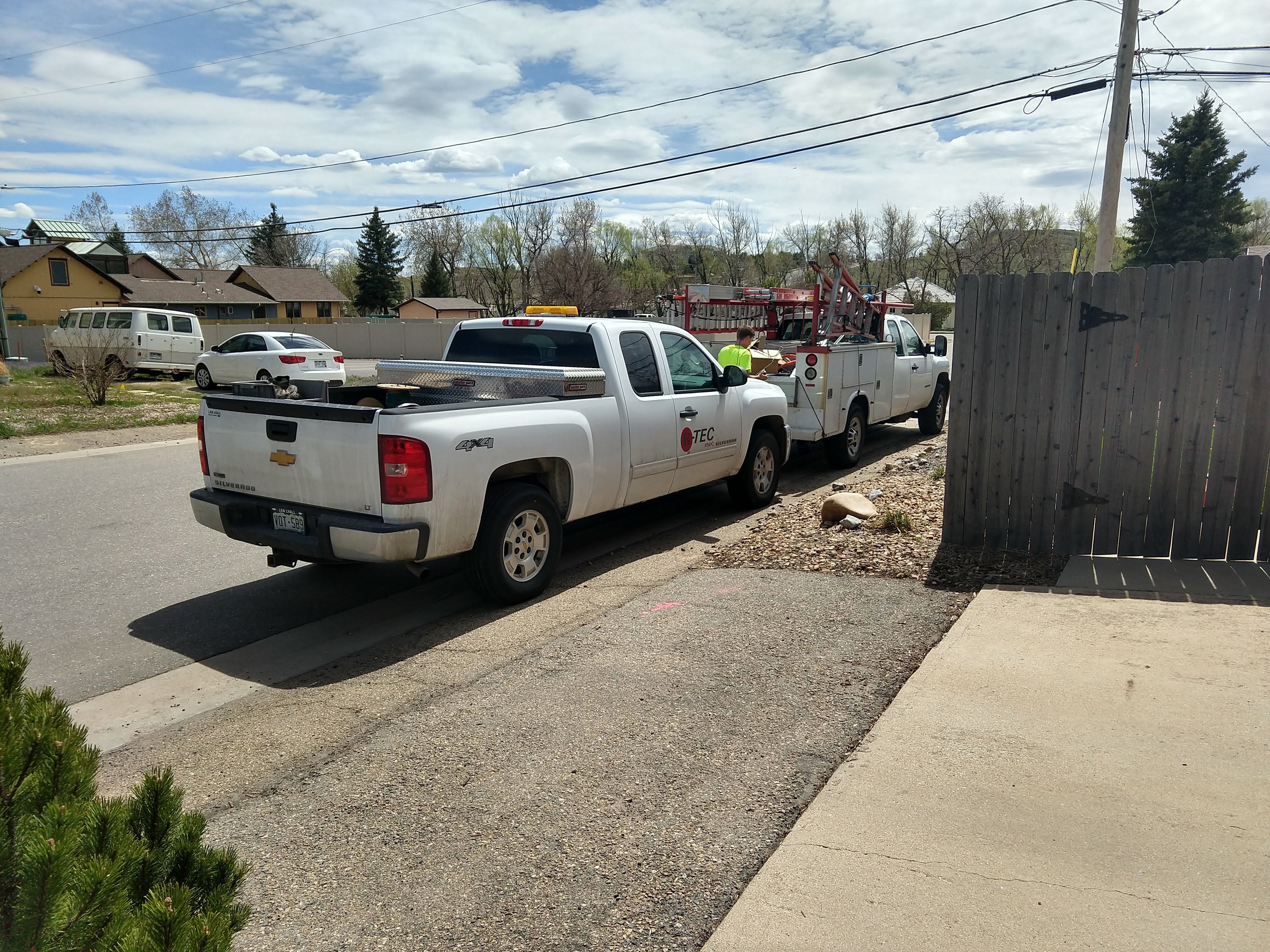 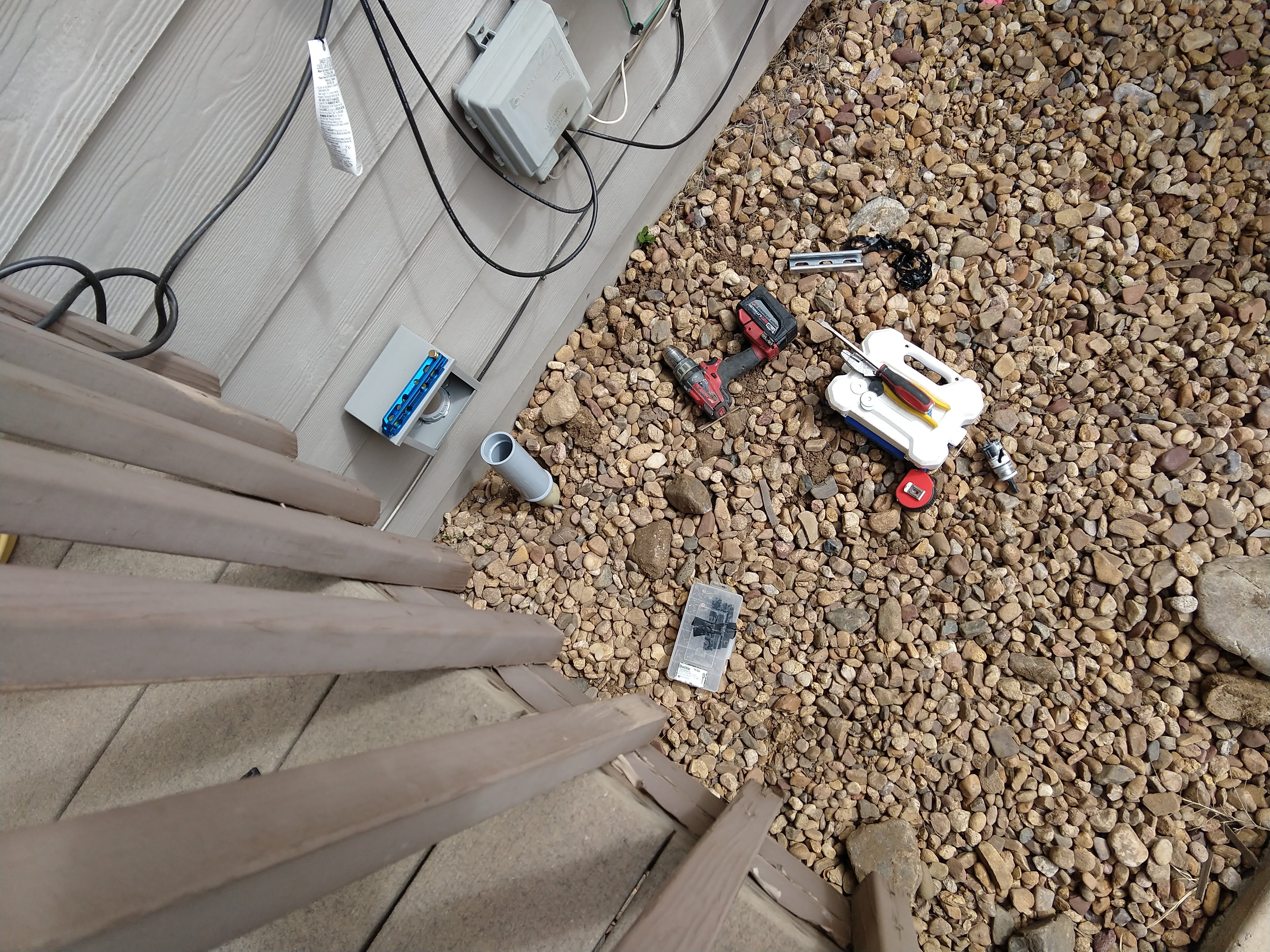 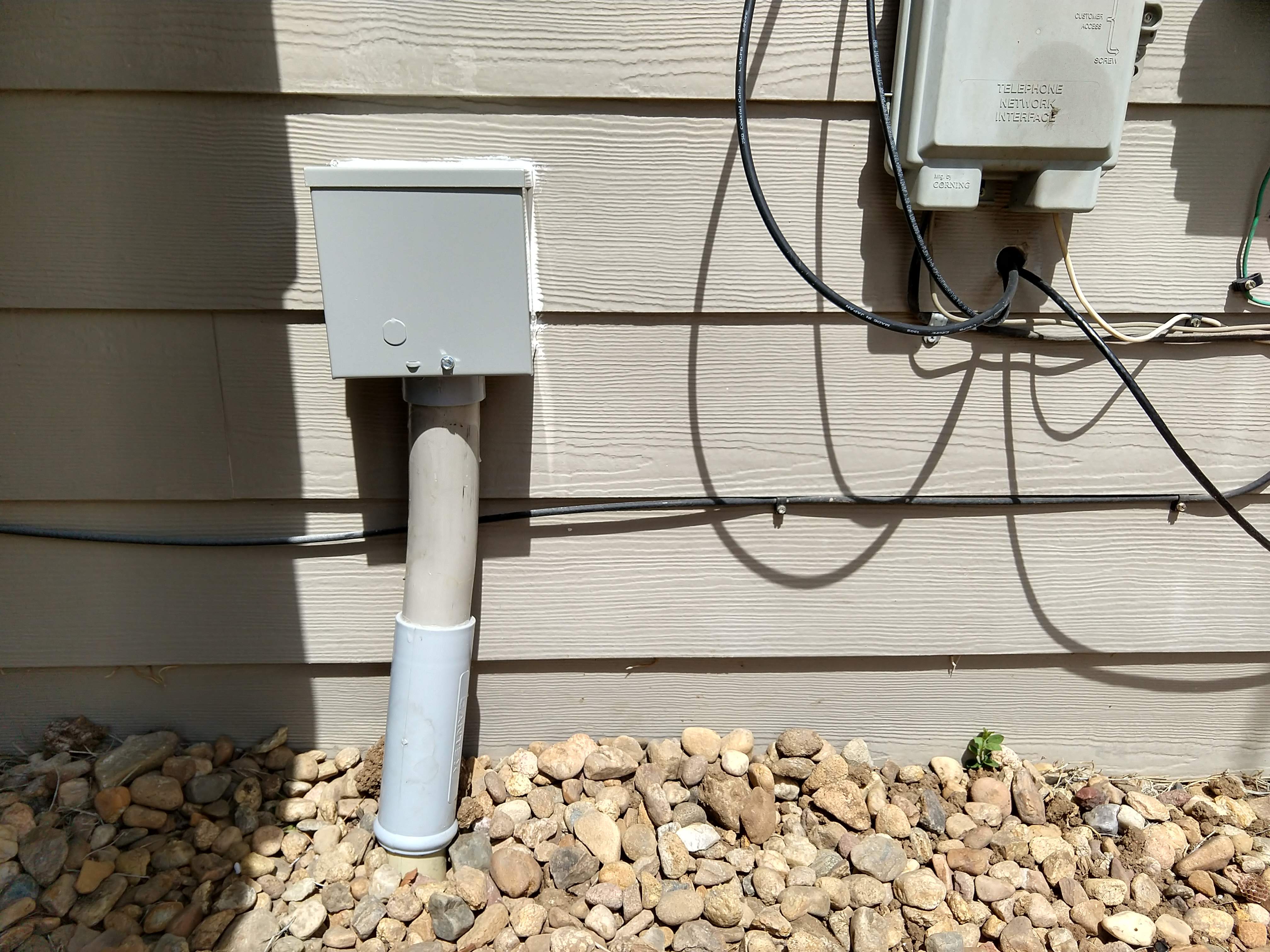 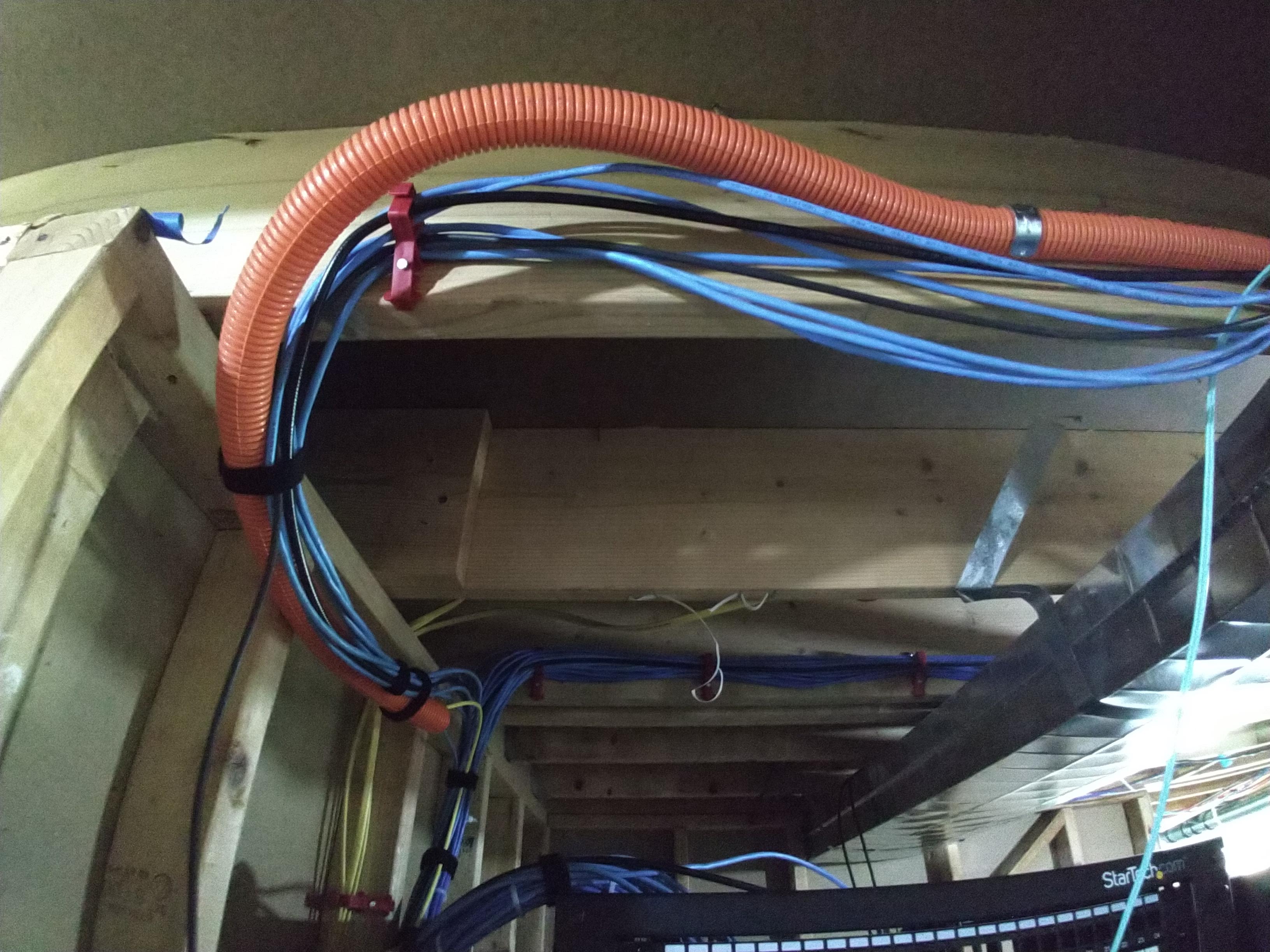 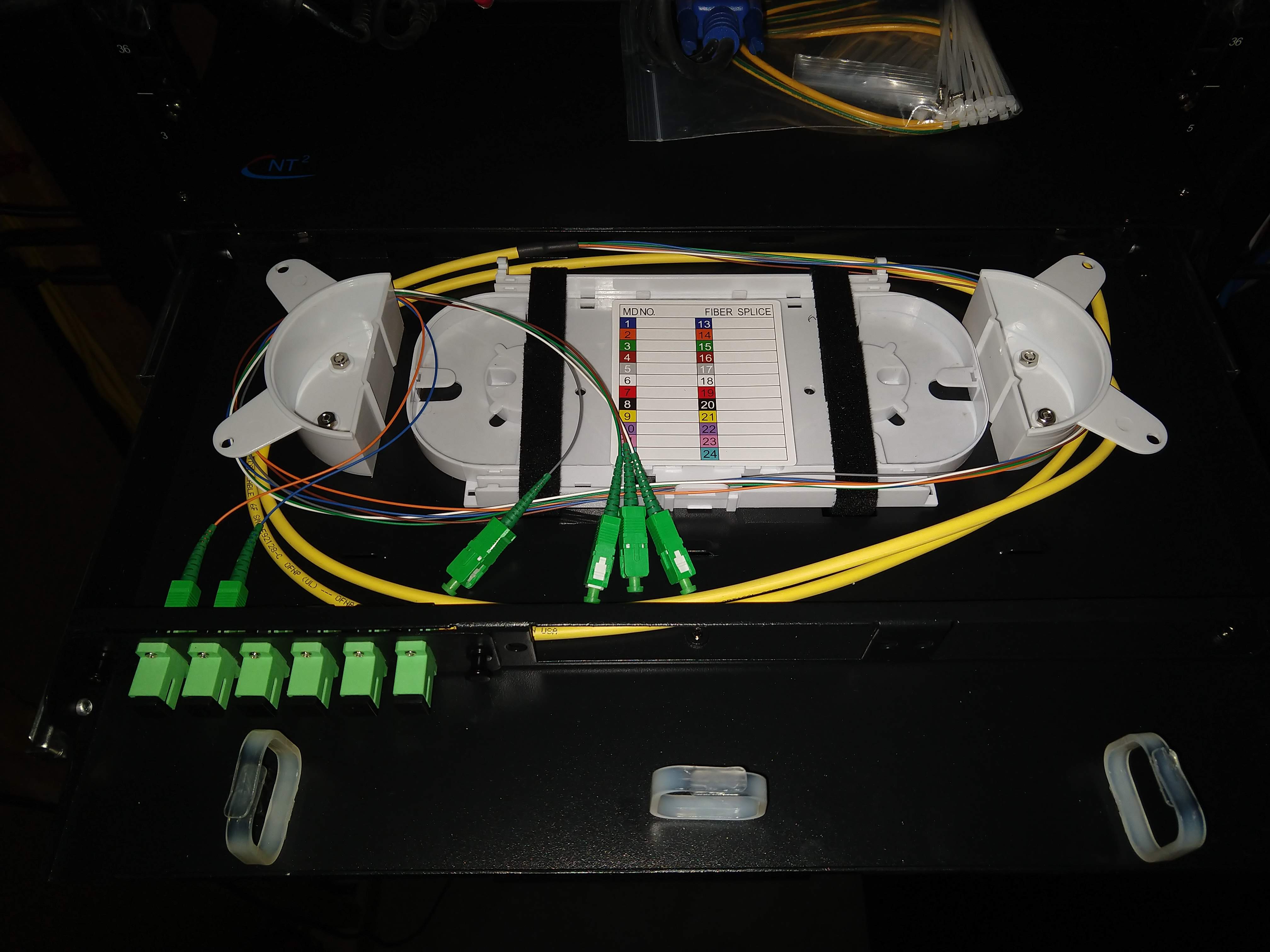 …and they were right. Upon approaching my home at 16:00 on Tuesday the 30th, I saw two vans outside my house. 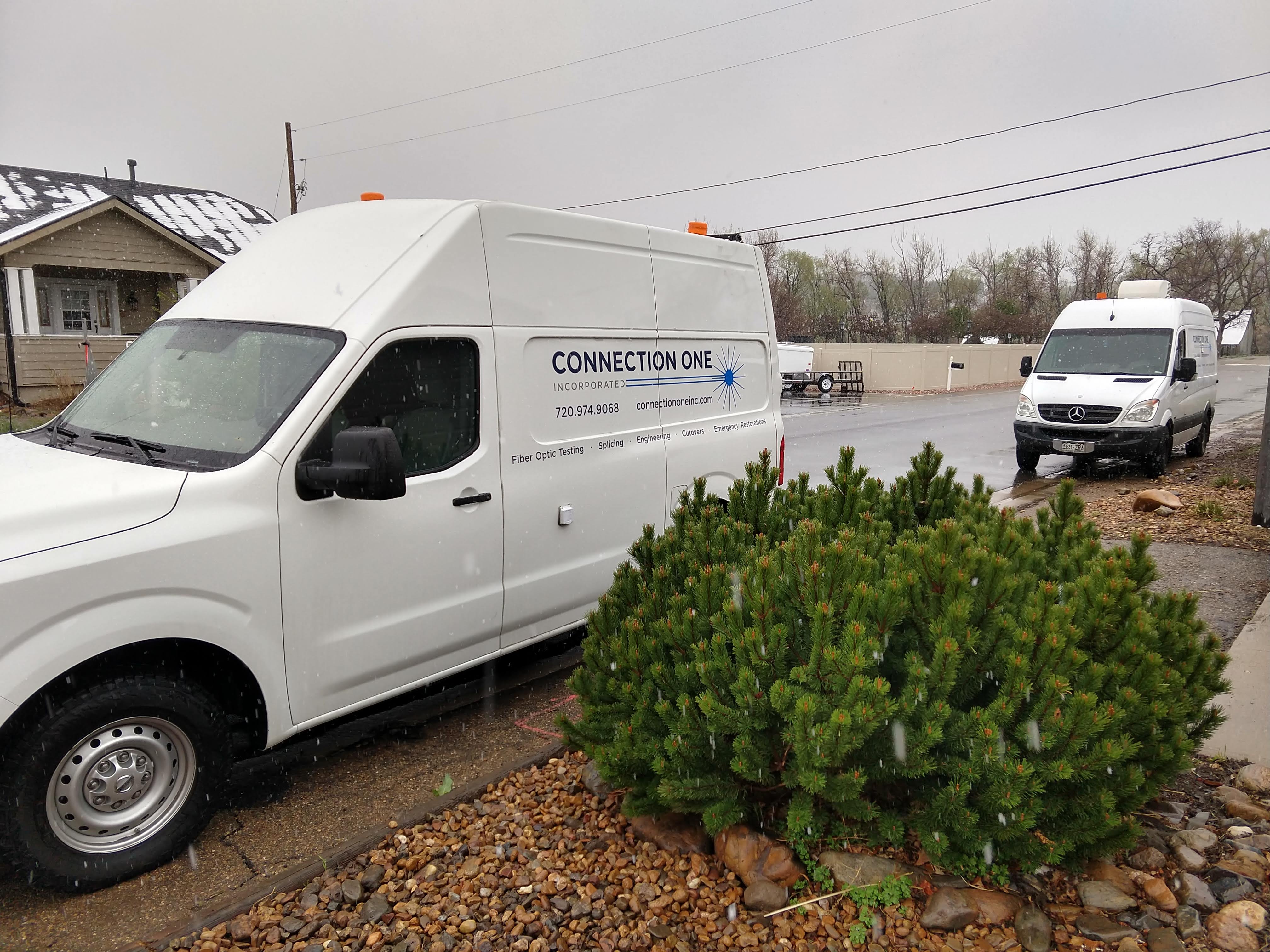 The splicers took about an hour to test everything and they informed me that they tested about 39,000 feet of fiber back to the headend. They told me to call Comcast and get them to hook me up. 😎

It’s been almost two months since the last activity from Comcast. I received this today from their Reddit rep:

Good morning. I heard back from the project manager. He let me know that there is some additional equipment that needs to be installed. He’s working with the proper teams to get that done. I’ll keep you informed with progress.

I received a call from Comcast today asking me to confirm the service order and installation time. It’s scheduled for Tuesday, July 2, 1300-1500. She asked me if I’d be using “[my] own modem” for this service and I explained to her that it’s a $10K piece of equipment so no, I would be renting theirs.

I received an email from Comcast Business with my static IP information and some basic information on what they would be providing. 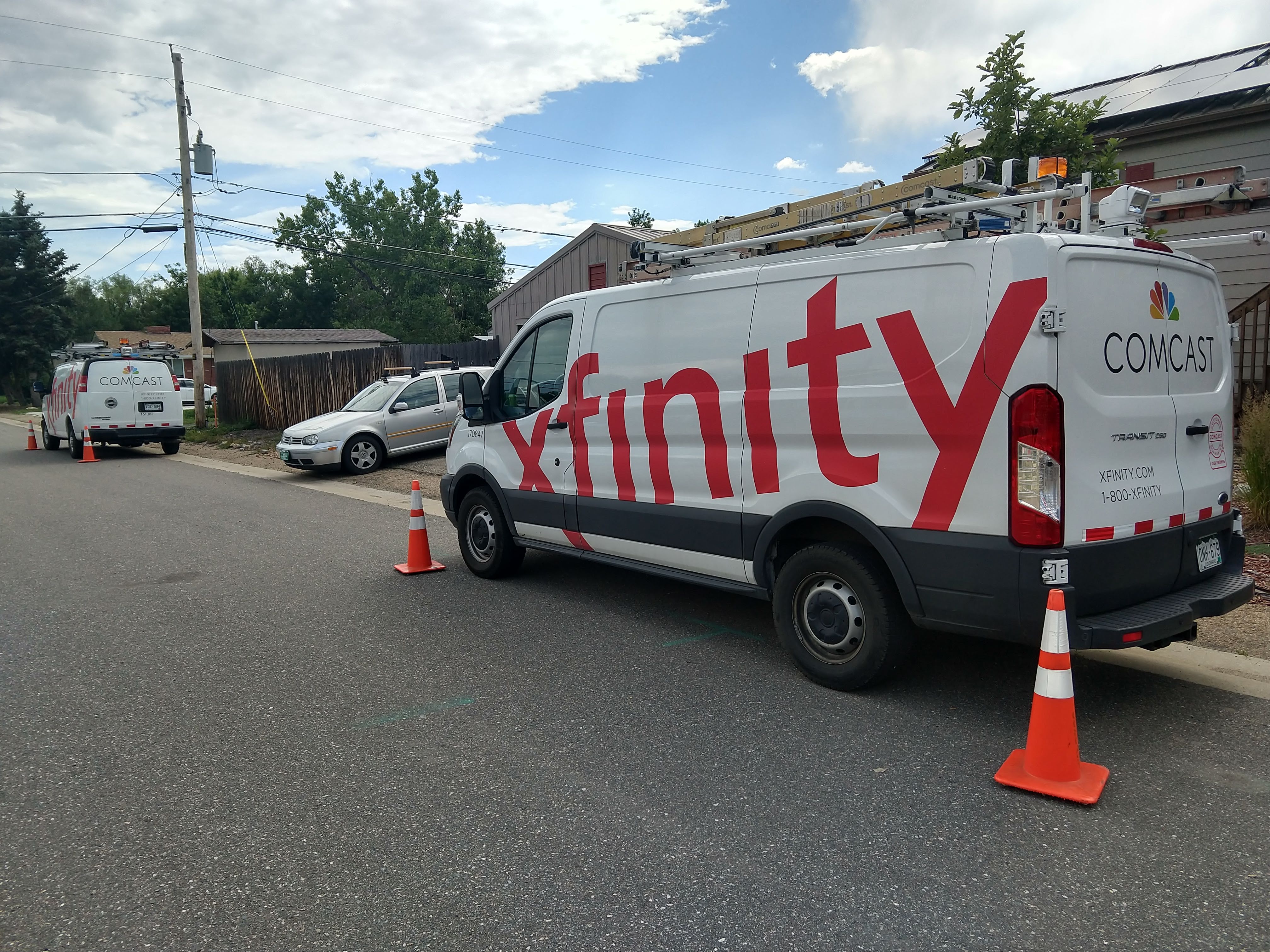 After a minor kerfuffle with the remote/headend SFP tuned to the wrong frequency, the “light” looked good at -15. They installed the Juniper ACX2100 and proceeded to the next step, which was tuning the local SFP+ module to the right frequencies….

…Which they could not accomplish even using a different router and different SFP+ modules. They finally gave up at 17:52 after all the rest of their support staff had left for the day. The plan was to reconvene later (possibly the next day).

I asked about how many of these residential installs they did and they said mine was the first.

The tech Daniel called in the morning and said he’d be back at 10 am. He was there on the dot. They had managed to tune the SFP+ to the proper channels at the headend.

He finally got the connectivity test working at 13:00 after multiple calls to different techs and tech supports.

Then at 15:00 he finally finished. Turns out Comcast’s documentation for the techs was inadequate. We basically had to guess the correct IPv6 addresses from the P2P link range they gave us. Hint: Comcast’s doing it like IPv4 with a /126. The 2nd IP in the subnet is the router and the 3rd IP is the local address. But hey — it only took 5 hours!

And then there was fiber internet.

And it was good. 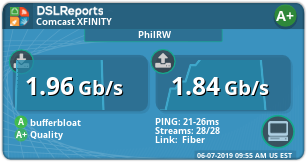