I recently purchased a Connect Systems CS800D mobile dual-band 2m/70cm FM/DMR radio and installed it in a 2011 Nissan Leaf. Here are my initial impressions and experience thus far.

I purchased the radio from Connect Systems, Inc. They appear to be a US-based brand and distributor of this Chinese-made radio. The price of the CS800D was 299 USD, and I added the programming cable and mounting bezel for an extra 30 USD.

Shipping was unbeliebably fast. It was eight minutes from when I placed the order to when I received a notification that the radio had shipped. Realistically it wasn’t dropped in the mailbox that quickly, but I appreciate the speedy response. They shipped to me via USPS Priority mail and it arrived within a couple of business days. 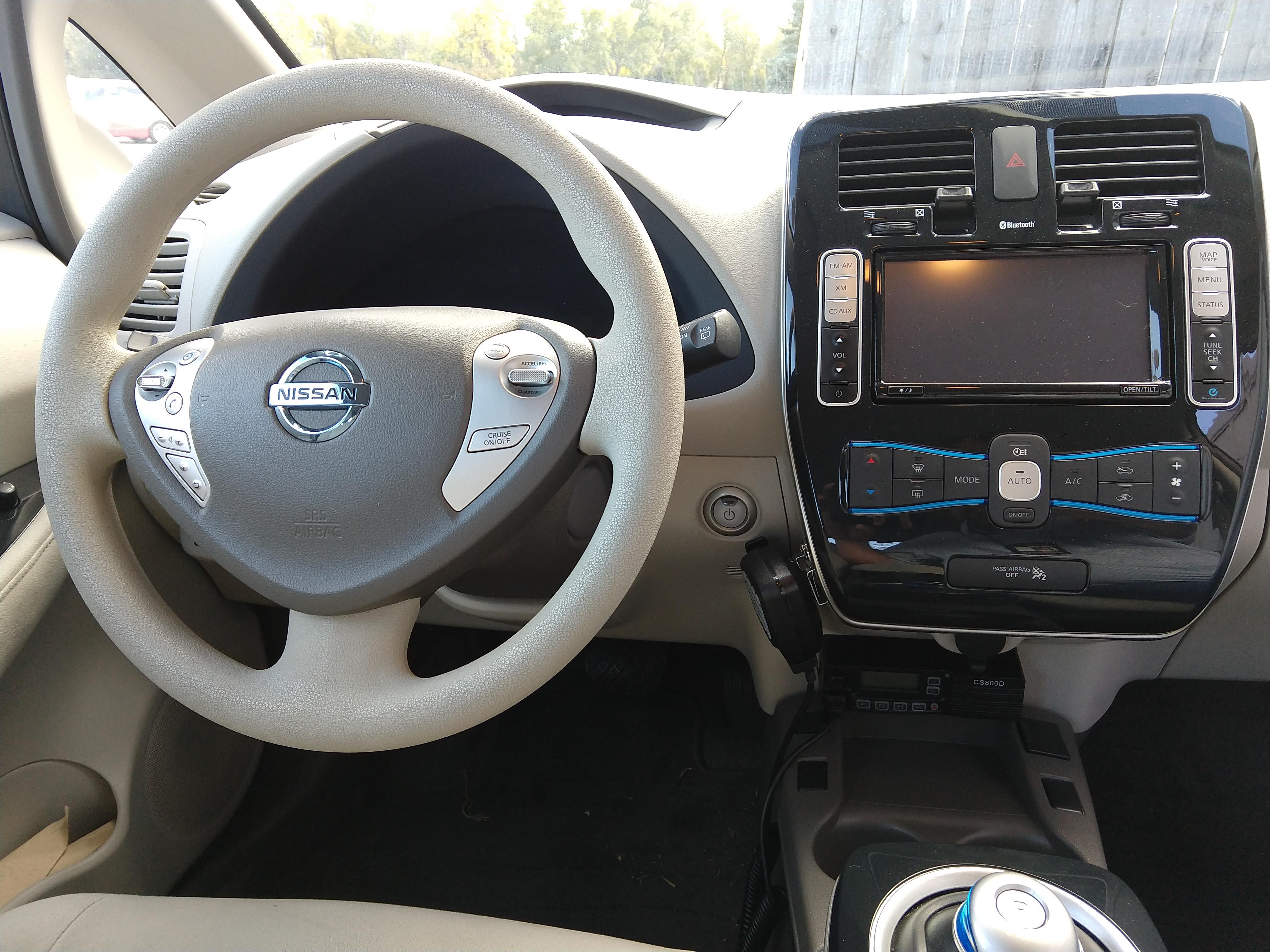 I was able to locate a perfect location for the remote head bezel at the front of the cup/junk/detritus holder area below the center dashboard. The remote head is perfectly situated between the USB port on the left and the audio input jack on the right, and the covers of both can still open. It’s a little awkward to see, but the driver should not be looking at the radio much when the vehicle is in motion anyway. Overall it’s a clean, surface-mount install with no visible wires (except for the mic) - my best install yet! It had to be clean and relatively inconspicuous since this our primary, shared vehicle. 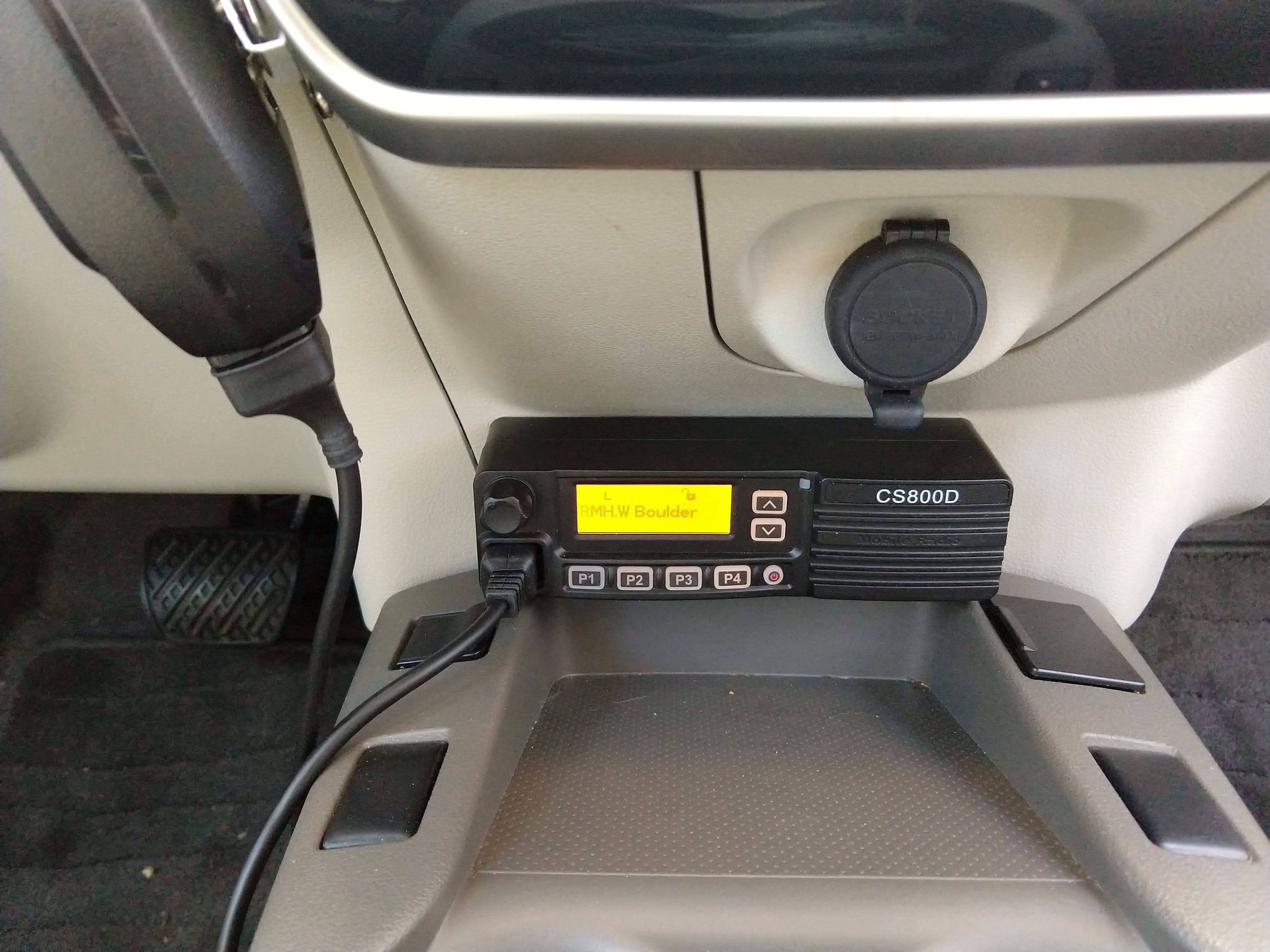 I drilled a 3/4” hole in the roof and connected the Comet B-10 NMO antenna and Larsen NMO-KHFUDFME mount to the radio by using the N adapter. I needed a ≤ 12” antenna to clear our unusually short garage door. On the Leaf (as in many other cars, I imagine) one must be careful to locate the hole away from any structural crossmember supports in the roof. 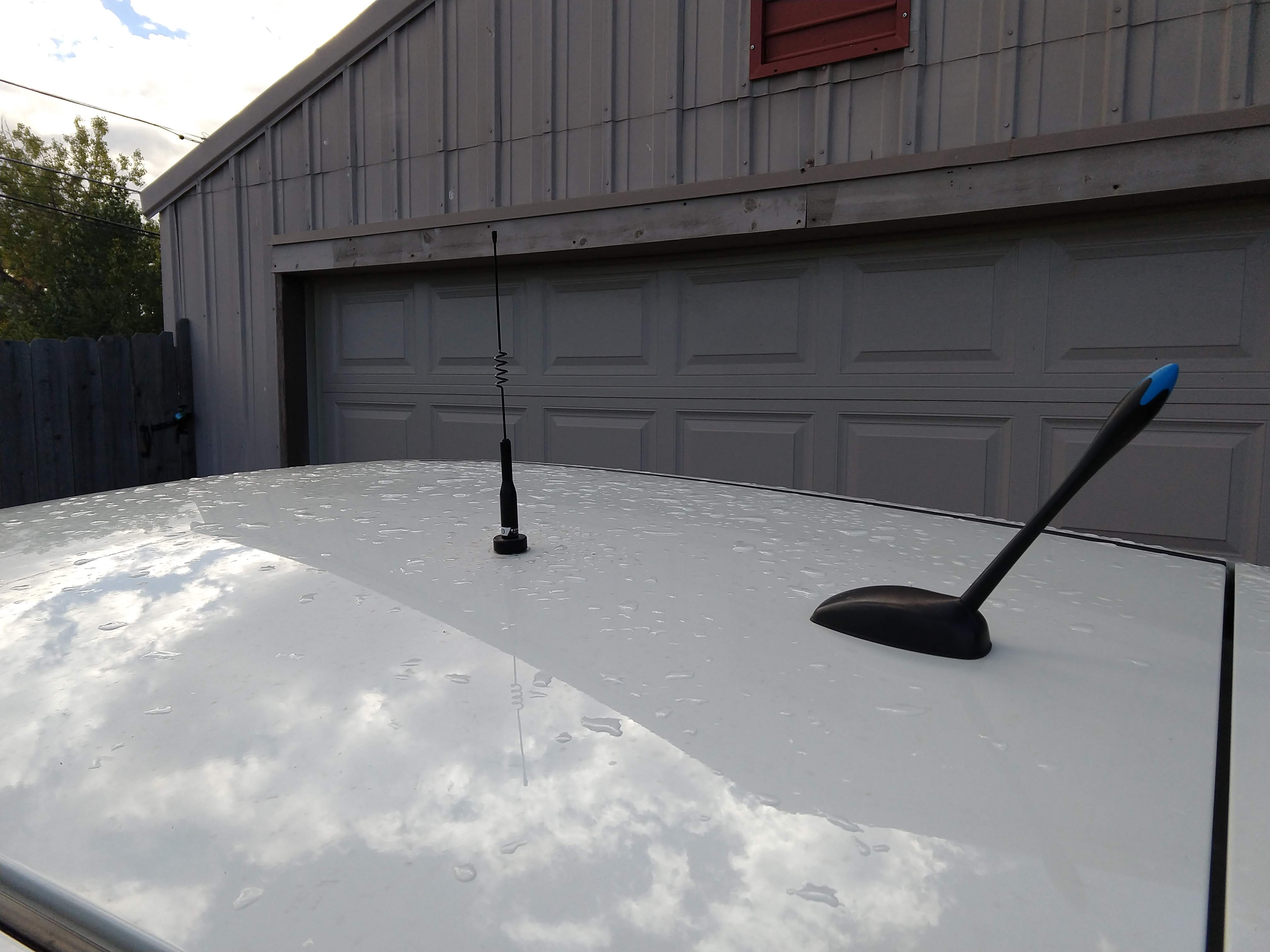 The radio itself is installed in the rear cargo compartment area that holds the emergency tire compressor and goo. It should remain relativelty accessible for quick reprogramming. 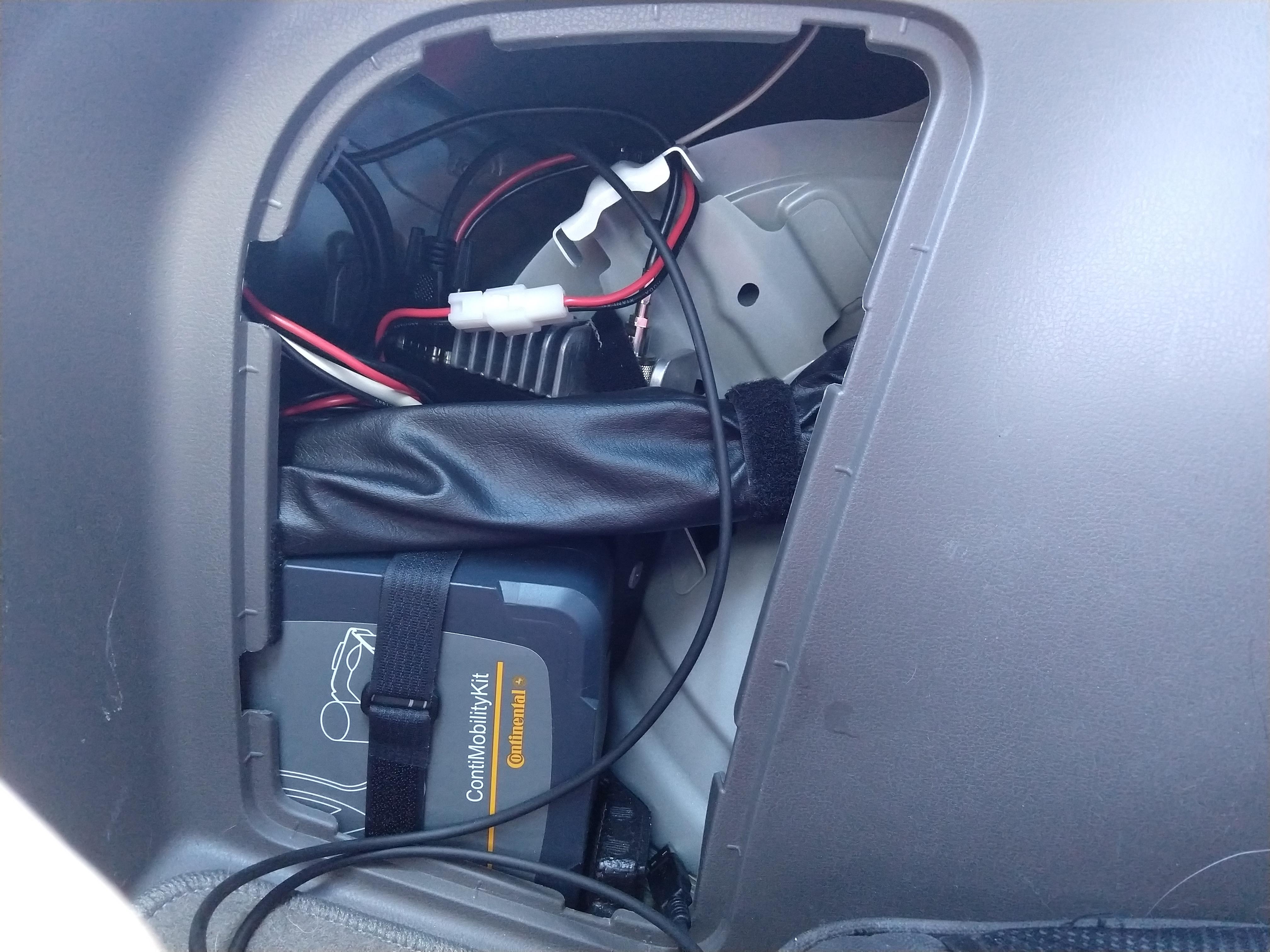 Having downloaded the programming software ahead of time, I was able to build a codeplug before the radio arrived. I was pleasantly surprised when I plugged the programming cable into my computer and the radio was immediately recognized as a mass storage device – no need to install drivers on my Windows 7 VM (running on VirtualBox in Mac OS X).

Once I uploaded the codeplug to the radio, my QA instincts kicked in and I tested the functionality of every software feature I wanted to use. Coming from Motorola XPR series radios, I have certain expectations as to the performance of a radio’s software element(s).

The CS800D reminds me of a first-generation MotoTRBO radio, right down to the menu structure, icons, and fonts. It’s a respectable interface, if a little dated. It’s perfectly acceptable for my intended use cases. But given the minor bugs I encountered, I can only spectulate as to their software development practices.

The problem is that the firmware on it is still a little bit buggy. Fortunately the bugs don’t seem to be in any critical areas. For example, here are a few nits I’ve picked with firmware version MS 20.36:

My hope is that they may remedy some of these issues.

One feature the manufacturer may not add is talker alias support (according to MSI’s tech support). There is plenty of room in the contact list for adding every ham DMR ID in the world, but if you do that and then want to find a particular ham to private call or send a text message to, good luck scrolling through that list. That is why I’d like to see talker alias supported. I can keep my friends in the contacts list but still see the callsign and name of who’s calling without making my contact database unmanageable. Also the CPS is quite unresponsive when there are so many contacts in the database.

Some things that I like about the radio that are not present in Motorola’s commercial offerings:

The RF portion of the radio seems to perform quite decently, even with such a small antenna. I don’t have a test bench with calibrated analyzers so I’ll have to make anecdotal observations.

From the same location, my UHF XPR7550e (portable) seems to indicate a stronger receive singal strength, but both radios are able to decode and play the signal, so it may merely be a difference in what the little S-meter means rather than a difference in electrical sensitivity. Or it could be both.

I can always switch to a taller antenna for various events and incidents as needed.

For the money, this radio is an excellent value. Not only is it a capable dual-band mobile FM radio, but the DMR features make it work with my favorite mobile/portable radio technology and global network. It has a few rough edges, but the only other alternative for covering both bands with DMR would be to purchase two separate Motorola/Kenwood mobile rigs. My area has a lot of legacy/analog FM VHF systems still in place for public safety, but also a lot of 70cm DMR repeaters, so the CS800D is the best balance for my particular situation.

Is the radio perfect? No. Would I install it in my Model 3? Probably not. Is it the best available compromise? Absolutely – especially given the price. I was all set to buy a TYT MD-9600 but then I looked at the programming software to get an idea of the features; there’s no comparison. Also I really kinda needed remote head mounting capability.

As a software engineer, I’d love to get my hands on the source code for the firmware, but that probably ain’t gonna happen. If it did, I’d have a new project: clean up the bugs and add some new features. Maybe even implement some DMR-standard interoperability in order to future-proof this rig a little bit more. 🙂

Knowing what I know about Chinese software development, I’d love to see a split model where they build the hardware and we build the software, but that would likely increase the cost of this unit. The question is, would it increase the value just as much? 🤔